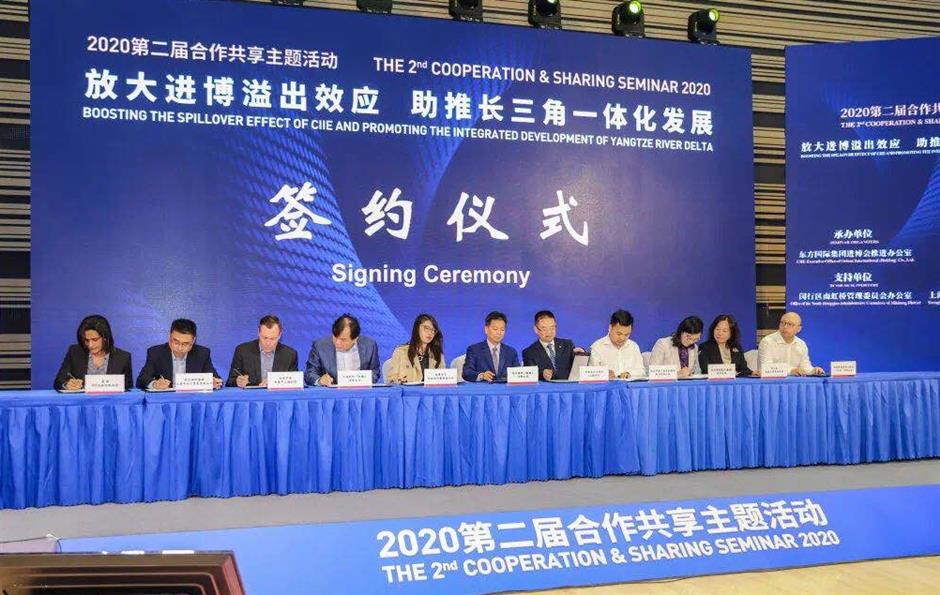 Authorities and enterprises shared their efforts and achievements in boosting the spillover effect of the China International Import Expo and promoting integrated development of the Yangtze River Delta at a seminar on Wednesday.

The event focused on discussing building platforms and setting up mechanisms, so as to enable the spillover effect to benefit more cities, more enterprises and more people.

“The first two sessions of the expo welcomed 2,429 companies and organizations in general, with 9,205 purchasers and professional visitors from Changzhou in Jiangsu Province,” according to Hang Yong, the city’s vice mayor.

With the promotion of integrated development of the Yangtze River Delta region, Changzhou’s participation in the expo is growing in the numbers of both participating companies and people, Hang said. This year, a total of 976 companies in the city had registered for the third Expo, with 5,038 buyers and professional visitors.

Jiaxing in Zhejiang Province, meanwhile, has made contributions to attract CIIE participators in the previous two sessions, with foreign exhibitors invited by the city covering a total area of 1,128 square meters.

The city also organized 9,159 people from 2,382 enterprises to take part in the first and second CIIE, achieving on-site purchases with an overall value of US$856 million, said Sheng Quansheng, Jiaxing’s vice mayor.

"The holding of the CIIE and the promotion of integrated development of Yangtze River Delta has brought an unprecedented opportunity for Jiaxing’s development," Sheng said.

Also at the seminar, the Orient International Group, together with the Shanghai branch of Exim Bank of China and the Alliance of Integrated Trade Service Providers of the Shanghai Trading Group of CIIE, launched the evaluation system of a index for China's consumption of imported goods in the Yangtze River Delta.

The first edition of the index will be released during the third expo.